Plant a tree in memory of Cynthia
An environmentally-friendly option 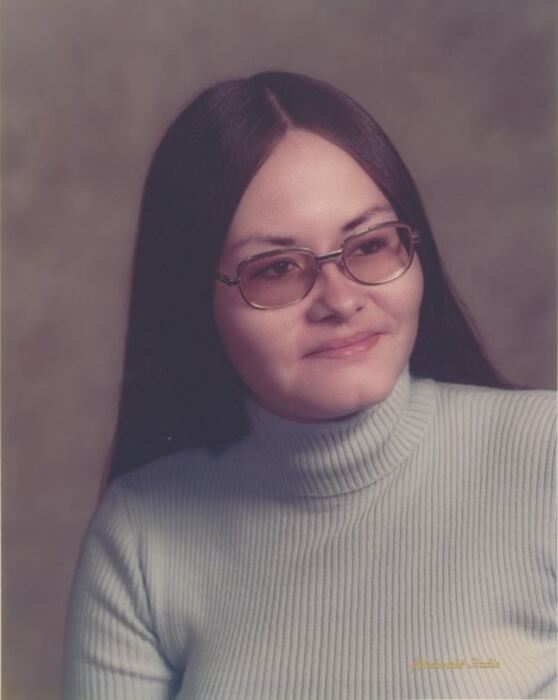 Cyndee was born to Raymond T. Gone and Irma M. (Turcotte) Gone on March 13th, 1958 at Fort Belknap I.H.S. hospital. She struggled to stay alive after two blood transfusions. Her oldest brother and father sat up on the hill fasting and praying until she made it through. She is forever grateful that her family believes in this traditional way. She tried to instill our native way to her own children.

Cyndee attended first to the fifth grades at Mission Grade School and was a cheerleading mascot learning many Mission Braves cheers, she attended first semester of her Junior year at Harlem High School and graduated from Hays Lodge Pole and from there she enrolled at MSU Bozeman for one quarter but got too home sick so came back to live at home. The jobs she held were working for Ft. Belknap Extension, and sometimes helped with the Fort Belknap Camp Crier, a live-in babysitter along with working shifts at Ron Perze’s Lil Bar & Café where she met her first love, Benny W. Rider and they have two sons from their relationship. They still remain friends.

Cyndee attend Upward Bound during the summers of her Sophomore to Senior years, meeting the big wide world and making many friends. She also went on weekend camping or rafting trips and attended pow wows.

She attended Fort Belknap College with a major in Secretarial Studies. She met the father of her third son and daughter’s Dad, Ronald D. Moccasin, Jr. They were together for approximately ten years. She decided to drop out of college to take better care of her Mother, it was more important to be with her. This time was very precious to Cyndee.

Cyndee also worked for the Fort Belknap Boys & Girls Club as Education Director, T.R.A.I.L.S. & CCF attending many workshops both locally, the state and in Jackson Mississippi, Denver Colorado and San Diego California. She was a tutor for the Safe Futures Program through the Fort Belknap College. She was employed as Financial Manager for the Boys & Girls Club of the Little Rockies.

Cyndee is preceded in death by her Grandparents, Morris Turcotte & Julia (McConnell) Turcotte, Fredrick Gone, Sr. & Mary (John) Gone TalksDifferent, her parents Raymond T. Gone & Irma (Turcotte) Gone, an Unborn Daughter, Brothers – Raymond D. Gone and Lyle A. Gone, adopted brother BirdHat and several Aunts, Uncles and Cousins. She will again see her Grandfathers Morris Turcotte and Fred Gone were an inspiration to this life, they both were her favorite people.

Cyndee grew up in Hays Montana so wanted to be able to spend her final days at her home. She loved pow wows and singing and use to sing peyote songs for her grandchildren. She often went on hunting trips with her big family and has many good memories of those times.

Plant a tree in memory of Cynthia by clicking here.
To send flowers to Cynthia's family, please visit our floral store.

Plant a tree in memory of Cynthia
An environmentally-friendly option

Plant a tree in memory of Cynthia

1 tree planted in memory of Cynthia

A Memorial Tree was planted for Cynthia Gone

Plant a tree in memory of Cynthia